Author Q&A with A. Lynn Williams

In the ten years since Interventions for Speech Sound Disorders in Children was published, it’s become a cornerstone text for pre-service SLPs, as well as a reliable professional resource for practicing speech-language professionals and early interventionists. The second edition is on the way, so we took the opportunity to ask lead author A. Lynn Williams, Ph.D, about the most valuable additions, including new intervention approaches and expanded video clips that walk readers through every step of the interventions discussed in the book.

Q: Could you walk us through what’s new in this second edition of Interventions for Speech Sound Disorders in Children? What would you say is the most valuable addition you’ve made to the book this time around?

A: There are several new features in the second edition, including some intervention approaches that were not in the first edition. We’ve also added new foundational chapters to the book, including:

All returning chapters from the first edition have also been updated, some with new authorship. Each chapter includes current research and evaluation of the quality of the evidence for the intervention approach, steps involved in implementing therapy (a therapy flowchart was included for most approaches), expanded information on the ICF aspects within each approach, and two to three learning activities to help the reader apply the information about each intervention approach. The professional video demonstrations that accompany the book now include intertext titles to guide viewers’ observation of the intervention approaches.

With all these new additions to the second edition, it’s difficult to pinpoint just one as being the most valuable! But if you pin me down, I’d probably say the new intervention approaches, though the videos continue to be one of the most valuable aspects of the book. The videos make the text come to life in the authors’ demonstrations of their approaches. And with the intertext titles, these videos are even more informative and instructive.

Q: How did you select which intervention approaches to cover in this edition, and which ones have you added since the first edition?

A: We selected those interventions from the first edition that had new published evidence since the 2010 edition, so there were a few interventions that didn’t make it into the new edition. The new interventions included in the second include:

Q: Could you describe how the Levels of Evidence tables in this edition will help readers evaluate the interventions?

A: The LoE tables help readers in two ways. First, the studies are arranged according to the level of evidence system adapted from the Scottish Intercollegiate Guideline Network (SIGN) system that ranks the evidence from 1-4, with 1 as the highest level with meta-analyses or randomized control trial (RCT) to 4 as the lowest level of evidence being expert opinion. Authors were also asked to evaluate the quality of the evidence using two systems: the Physiotherapy Evidence Database (PEDro) scale for experimental group designs, and the Risk of Bias of N-of-1 Trials (RoBiNT) scale to evaluate the quality of single case experimental designs. The information provided in the levels of evidence tables will help readers effectively gauge the strength of an intervention’s empirical base, which will allow them to determine an intervention’s likely benefit for appropriate children.

Q: Can you tell us a little about the video clips that accompany the book? How do they enhance and reinforce what readers learn about interventions for speech sound disorders?

A: We consistently hear from readers of the first edition that the videos were extremely beneficial in understanding and learning the intervention approaches. In fact, I met a professor from the University of Geneva at an international conference in 2018 who told me her students were complaining that she used an English text for their class, but when they saw the videos, they understood the approaches and how they were to be implemented.

For the second edition, we asked authors right at the beginning of their chapter to describe their video in terms of the child and what was being demonstrated. Then within each video, we added intertext titles that highlight what was being demonstrated in the approach. Both of these set the reader up for what they’re going to see in the video, tell them exactly what they’re seeing in each step, and show them that intervention step within the video demonstration. That type of reinforced learning guides the learner to make important connections between what’s written and what’s demonstrated for each intervention approach. 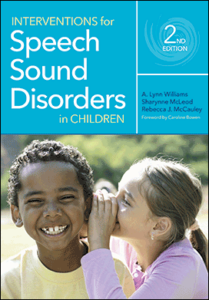 Bringing together a powerhouse team of international experts, this new edition has been revised and enhanced with current research, new interventions, more guidance on selecting interventions, and updated video clips that show the approaches in action. For each intervention, readers will get a clear explanation of its robust evidence base, plus thorough guidance on implementing the approach, monitoring progress, and using the intervention with children from culturally and linguistically diverse backgrounds.