New edition of gold-standard textbook on articulation and phonological disorders—now published by Brookes!

For forty years, this textbook has been the gold-standard resource for providing speech-language pathologists with a strong foundation of knowledge on speech sound disorders.

Previously published as Articulation and Phonological Disorders, this core text is now in its ninth edition, fully updated and expanded to meet the needs of today’s clinicians as they work with children of all ages. 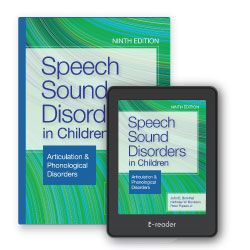 A cornerstone of every SLP’s professional preparation, the new edition of this book offers the most up-to-date, comprehensive coverage of contemporary clinical literature and the best available treatments for speech sound disorders. With a focus on evidence-based practice, the expert authors and contributors present essential information and guidelines on a broad range of topics, from the basics of typical speech production to recommended practices for assessment and intervention. Updates include new and expanded chapters on timely topics, new instructor materials and student-friendly features, and helpful guidance for clinicians serving an increasingly diverse population.

Faculty can easily incorporate this text into their course with the fully updated online Instructor’s Resource Manual and Test Bank. Included are key points, discussion topics, and instructional ideas for each chapter, plus a bank of multiple choice, short answer, and essay questions.

John Bernthal, Ph.D., was an emeritus Professor at University of Nebraska–Lincoln. His career included positions in the public schools of Louisiana, at the Northwestern State (Louisiana), Minnesota State University–Mankato, University of Maryland, University of Northern Iowa and University of Nebraska–Lincoln. He served for 30 years as a department chair at the More Resources latter two institutions. He published articles, tests, and books in the areas of speech sound disorders in children. He received the Honors of the American Speech-Language-Hearing Association, the Council of Academic Programs in Communication Sciences and Disorders, the National Student Speech-Language and Hearing Association, named 2007 Kansas University Distinguished Allied Health Alumnus, and served as President of the American Speech Language and Hearing Association.

Nicholas Bankson, Ph.D., is an Emeritus Professor at James Madison University. His career included tenured positions at the University of Maryland, Boston University, and James Madison University. Dr. Bankson served for 27 years as a department chair that included the latter two institutions. He has published articles, tests, and books in the areas of speech sound disorders in children, and child language disorders. He has received the Honors of the American Speech-Language-Hearing Association, the Council of Academic Programs in Communication Sciences and Disorders, and the National Student Speech-Language and Hearing Association.

Peter Flipsen Jr., Ph.D., S-LP(C), CCC-SLP, is a Professor of Speech-Language Pathology at Pacific University. Dr. Flipsen has more than 30 years of experience in the field as a clinician, teacher, and researcher. He teaches courses in phonetics, speech sound disorders in children, and research methods. He has published more than 30 peer-reviewed journal articles in the field. His research has focused on classification of speech sound disorders, measurement of intelligibility of speech, speech and language development in children with cochlear implants, and the treatment of residual speech errors in older children.