From the developers of ASQ-3™ and ASQ:SE™!

Download a quick reference sheet
SEAM At A Glance

Both SEAM and the SEAM Family Profile were designed to be completed by families with the assistance of a service provider. The parents or caregivers will sit down with the service provider and complete the SEAM items together.

SEAM and SEAM with Ages both are focused on children’s skills and include 10 developmental benchmarks and corresponding items that reflect optimal social emotional development. These two forms are identical except that the SEAM with Ages includes estimated age ranges for the behavioral examples included with items. Due to variability in children’s developmental progressions, not all children will acquire skills at the same time; however, the SEAM with Ages indicates expected ages for acquisition of children’s social-emotional competence benchmarks. This form provides general guidelines to support service providers in discussing social-emotional development and skills with families.

The SEAM Family Profile targets parenting skills that are critical to the development of children’s social-emotional competence. It includes four benchmarks and corresponding items—such as “responding to my child’s needs” and “providing predictable schedule/routines and appropriate environment”—that family members can consider and discuss with their service provider.

Programs will vary in their use of these different SEAM components. For home visiting programs focused on parenting skills, all three components may be used: the service provider may complete the Infant SEAM with the mother on one of the initial visits and use the SEAM for Ages to provide appropriate examples for discussion with the mother. After a discussion of important strengths and goals for intervention, the service provider can use items on the SEAM for Families for later discussion on ways the mother can assist her infant in self-regulation and communication, for instance. 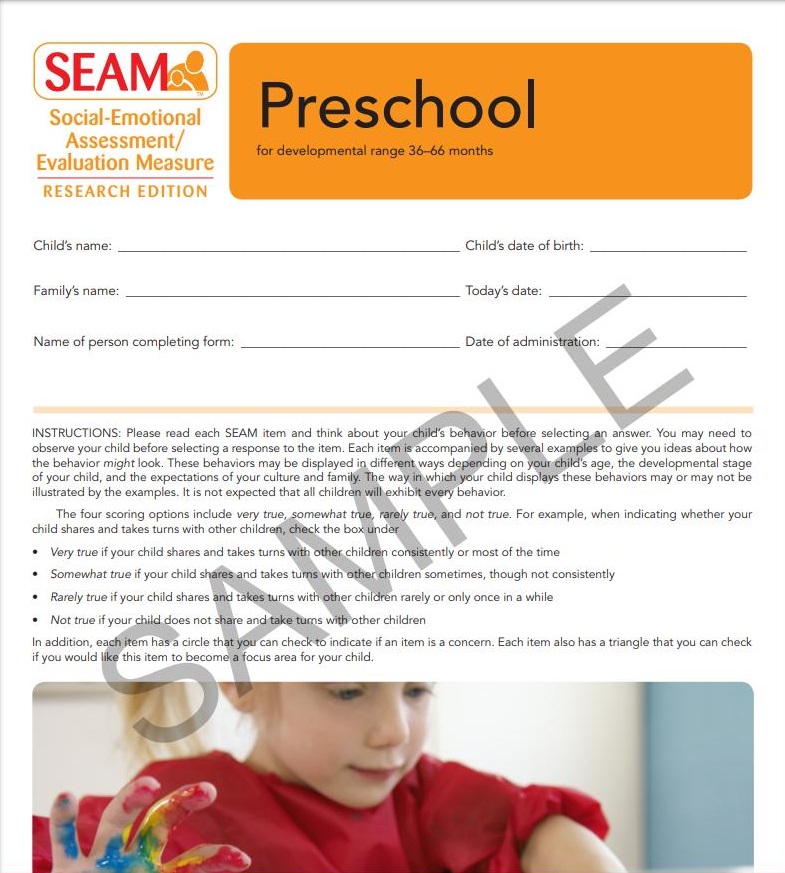 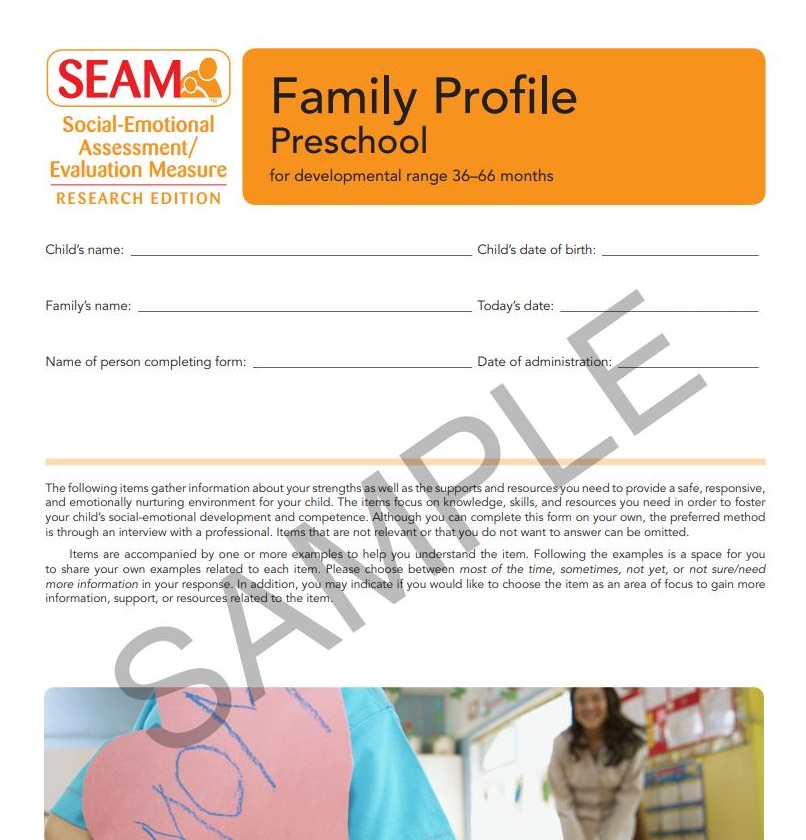 SEAM can be used as part of a “linked system” for identification of possible social-emotional delays and intervention activities for improving social-emotional competence in young children from birth to 6 years. Screening with the Ages & Stages Questionnaires®: Social-Emotional (ASQ:SE) screener is the first step in the ABI:SE (Activity-Based Intervention: Social Emotional), process [outlined in the book An Activity-Based Approach to Developing Young Children’s Social Emotional Competence]. SEAM can assist with subsequent identification of specific goals for activity-based social-emotional interventions.

As part of this “linked system,” the ASQ:SE is first administered to identify overall strengths and concerns in a child’s general social-emotional profile. As a screening tool, ASQ:SE results indicate whether a child’s social-emotional behaviors appear to be developing on target or whether they might need further evaluation or supports from community providers. For children with developmentally appropriate behaviors and those with few concerns, SEAM can then be used to further identify areas of family strength and concern, as well as to assist in the identification of goals for intervention activities. For children with identified social-emotional and other developmental delays, SEAM can be used as a supplement to these interventions..

SEAM is designed for use by a variety of professionals, including those without a background or training in mental health and/or behavioral interventions. Professionals should be adequately supervised and supported by the service providers.

Home visiting, parenting support, Head Start and Early Head Start, preschool, and early intervention/early childhood special education programs are examples of programs that can use SEAM. The system was designed to be administered in a child’s home, child care center, intervention program, or other community setting in order to yield in-depth information on children’s social-emotional skills and deficits, as well as on their caregivers’ strengths and areas of need.

Such information can be used by child care providers, teachers, and early intervention and early childhood special education personnel to develop high-quality and developmentally appropriate social-emotional goals and objectives for children and their families.

SEAM provides a comprehensive tool for identifying strengths and concerns, intervention goals and objectives, and for guiding intervention activities with families and children that are focused on social-emotional and behavioral competence. As a curriculum-based measure, using the SEAM components serves as a foundation for an activity-based system in which goals, intervention, and evaluation are linked through content and process. SEAM provides programs with an effective and efficient system to support their work with families.

Parents should feel more supported by programs and knowledgeable about their child’s strengths and needs, as well as become aware of specific activities to support and strengthen their child’s social-emotional competence. The hope is that, with this added knowledge and skills, parents will become more competent as well as confident in their social emotional interactions with their young children.

SEAM was developed to assist in the early identification of social-emotional difficulties and behavior disorders and to prevent subsequent problems by targeting and practicing skills that can promote healthy interactions, improved communication, and enhanced self-regulation in young children and their families. SEAM was also designed to support the development of positive partnerships between providers and families in order to encourage and facilitate positive parent–child interactions during the early childhood years.

Adequate training on administration of the SEAM will facilitate its effective use. Families with multiple needs may need additional supports and services that are identified through SEAM completion. Programs should have a referral resource list of available mental and behavioral health and counseling agencies for families in need of these additional services.

SEAM benchmarks and items were identified from the literature on social-emotional development of young children raised in mainly Western cultures; certain concepts repeatedly emerged as those that were deemed essential or critically important to the mental health competence of young children (Squires & Bricker, 2007). These benchmarks and items were reviewed and revised in an iterative process based on feedback from family members and experts in infant mental health, early childhood, early intervention/early childhood special education, psychology, and behavior disorders. Any items that appeared difficult to understand or had ambiguous meanings were revised based on expert and caregiver feedback.

We recommend that programs complete some training, either by contacting Brookes On Location to arrange for onsite or online training sessions, or through a train-the-trainer model with trainers that have received training by SEAM developers.

Can you describe a program that has used SEAM and how that improved their work with parents?

One Part C early intervention program chose to use SEAM in the context of home visits and parent/toddler groups. Practitioners completed both the SEAM and SEAM Family Profile on home visits, through interviews with caregivers or by reviewing responses with caregivers after they had completed the tools on their own.

In the parent/toddler group, the practitioner introduced SEAM to the group and each caregiver completed it individually as they went through the items together. The early interventionists from this program really liked completing the SEAM and SEAM Family Profile through an interview format. Having the practitioner involved proved helpful in clarifying items, explaining examples, exploring concerns, and helping caregivers choose appropriate response options.

Early interventionists found the SEAM helped them open up conversations with families that might not otherwise have taken place and ask questions that helped identify areas in which families needed support.

As one practitioner stated:

It was a really nice forum for a conversation to learn more about the frequency [of certain behaviors]. Things were more intense than I had realized previously. I hadn’t really asked the right questions until I stepped through [the process of completing the SEAM].

I found some areas that I didn’t know were issues for families or where they were having difficult times. So it did help me guide the home visit piece of my service [and focus] more around the social routines … I found out really new information about their social skills, where it wasn’t a delay in social emotional development, but there [was] some sort of social functioning happening within the context of the family that I could help with.

Completing SEAM also helped early interventionists in this program explain to caregivers the importance of social-emotional development to other areas of development and give them examples of what their child’s social emotional skills and development might look like.

Finally, practitioners in this program used the SEAM Family Profile to help guide the development of meaningful family outcomes that were relevant to caregivers’ needs and concerns.