To prepare young children for Science, Technology, Engineering, and Math learning, you don’t have to wait for them to be older! You can begin coaching them in the same problem-solving techniques engineers use.

Simplifying the engineering design process to developmentally appropriate levels, when children encounter a problem, prompt them to 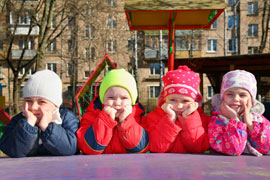 The authors of the new book Engaging Young Engineers clarify these components of the problem-solving framework:

Teachers can find ideas for how to nurture these qualities in Engaging Young Engineers and can also be on the look-out for chances to model them. For instance, consider this playground scenario:

Pierre has eight preschoolers who want a turn on a tricycle, but one of the tricycles has a broken wheel. See how he demonstrates how to work through a problem using the five foundational thinking skills:

Pierre wants to get the broken tricycle back into use as soon as possible. With the toddlers standing around inspecting the broken tricycle, Pierre calls to his coteacher, Amanda, to show her the problem. He asks her if they have a screwdriver to reattach the wheel to the tricycle. Amanda replies that the screwdriver has gone missing. The children look worried.

Pierre promised the children that he will not give up. He wonders aloud: “How can we fix the wheel without a screwdriver?” He says he thinks maybe a quarter would work. He pulls one out of his pocket and tries to turn the screw but the quarter is too thick. He explains that he will need to adapt his approach and try something else. He asks Amanda and the children if they can think of any other items that might work similarly to a screwdriver, with a hard, straight, think edge. They generate several ideas: a dime, a small pair of scissors, or a key. Pierre thinks out loud: “So we have a couple of possible other tools we can try. Let’s try one at a time and figure out if any of them will work to screw this wheel back on.”

They gather the other possible tools, and after several attempts, the dime works to screw the wheel back on securely. Pierre reflects aloud: “I wasn’t sure if we were going to be able to fix this without the screwdriver. But we kept trying until we fixed it with the dime. You all really know how to help solve a problem.”

Take a look at examples of ways teachers can apply these higher order thinking skills themselves in this chapter on Curious, Persistent, Flexible, Reflective, and Collaborative Teachers.

Following the same sort of problem-solving framework that engineers use becomes second-nature once you begin to practice it. Not only does it prepare young children for STEM and other complex learning tasks, but it also supports positive social-emotional development, self-regulation, and the development of executive function.